“AN IDENTIFYING JOHNNY HODGES MEDLEY”, said the Duke of Ellington at Carnegie Hall, on December 27, 1947 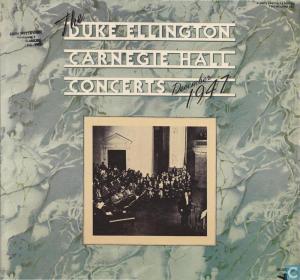 The experts among you will immediately think: ‘Why, for heaven’s sake, did Brew take this medley as the first sound example from the very concert where the Duke and his men performed “LIBERIAN SUITE” for the very first time?’

Well, dear readers, I have three quite simple reasons, that’s why.

1st of all: Those seven minutes of beautiful altosaxophone “beyond categories” alone would justify the posting of this track.

2nd: The first title of this medley is “WANDERLUST” (initially recorded by a small group ’round Mr. Hodges in 1938, then performed on the soprano sax), which is originally German; it means something like “itchy feet”, “desire to wander”, or “the travel bug”. 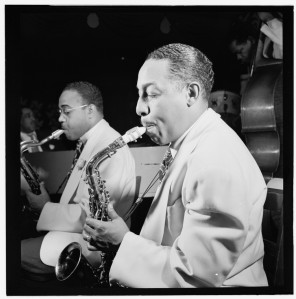 And so, I’m quite proud that a black American jazz musician expressed his nostalgic emotions by borrowing a German word, and that only two years after the war.

The 3rd reason is, that this medley sounds still fresh today, and it must have inspired the Duke who shouted a 2nd of two clearly audible “Yeah’s!” after an especially tricky phrase by the master saxophonist Johnny “The Rabbit” Hodges.

As I said at JazzTube already: Go for the vinyl, and try to get as many of those wonderful mid-to-end-1940’s Carnegie Hall Concerts by Duke Ellington & His Famous Orchestra. They are loaded with outstanding Ellingtonian music, and the sound was – as you can hear – mostly pretty well recorded.

And now, sit back, relax, and enjoy!