The President of the United States of America, Mr. Barack Obama, who has visited Germany five years ago, was in Normandy the next morning, for celebrating the day which helped to end World War II in Europe, then 65 years ago:

With this swingin’ little playlist, organized as kinda broadcast, I want to honor all soldiers of the Allied Forces who participated in this bloody but victorious battle for freedom and democracy.

All tracks are more or less loosely connected to this very day. I recommend that you’d listen closely to track #2 because it had been interrupted for a surprising announcement.

Harry James’ theme Ciribiribin is working as a bracket. It is taken from the famous D-Day-Broadcast with Harry James & His Orchestra; just like the beautiful arrangement of It Could Happen To You, sung by Kitty Kallen.

Tommy and Jimmy Dorsey’s Brotherly Jump is dedicated to the combined troops of Americans, Australians, British, Canadians, Free French, Norwegians and Polish under the command of General Dwight D. Eisenhower which landed at “Utah, Omaha, Gold, Juno and Sword”, the five sections which divided the beaches of Normandy.

They were all soul brothers who fought for the same war aim: Getting rid of the nazi tyranny once and for all.

Count Basie’s On The Upbeat was one of the theme songs of AFN, the American Forces Network right after the war in Germany. The P.S. is played by Glenn Miller’s Army Air Force Band, a beautiful rendition of David Rose’s Holiday For Strings, which was broadcasted by the British Forces Network (BFN in Hamburg) in the weeks after the war.

It has a special, a very moving memory attached: This very theme became the liberation song of a very good friend and neighbor of mine, Mr. Ralph Giordano, a German best selling author & documentary filmmaker, former “Swing Kid” from Hamburg, and Holocaust survivor who is living right around the corner, here in the beautiful Bay-In-Valley, the South-End of Cologne.

All other tracks are self-explanatory and stem mostly from V-Discs. 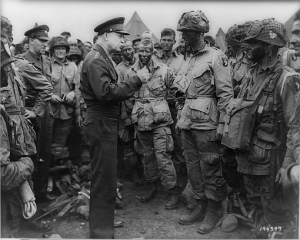