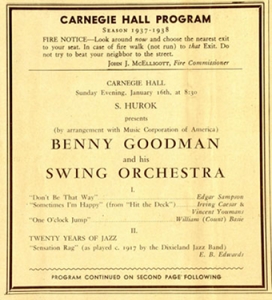 This is a loose series of associative clips and sounds, posts and thoughts, that I have written over the weekend and collected here in this little thread.

Prologue (from the Bix Forum):

Note: All the linked videos in the above post have been removed, and re-uploaded by HotJazzTuber Atticus70. But the titles & dates are still there.

Now, forward to the later past, when the swing era was in full bloom:

First we would like to introduce the members of our band … with a funny tune, entitled Oh! Boom. — Martha Tilton and the leader himself do the vocals on this ditty which never was played on stage as far as I know.

There were other vocalists too who had their more or less short appearances at the king’s court:

Ella Fitzgerald, Helen Ward, Joe Harris and – one of the most unusual – the Count’s Jimmy Rushing.

Mr. Five By Five sang, no, he shouted, or better:

He “chewed” some hardly understandable lyrics to a song no one would remember today, if it hadn’t been issued on various “complete” sets with Benny Goodman & His Orchestra:

He Ain’t Got Rhythm

HE AIN’T GOT RHYTHM
lyrics transcribed by Mr. B from NJ

HE ATTRACTED SOME ATTENTION WHEN HE FOUND THE FOURTH DIMENSION,
BUT HE AIN’T GOT RHYTHM, NO ONE WITH HIM, THE DUFFEST MAN IN TOWN

A LONELY MAN IS HE, BENDING OVER HIS BOOKS
HIS WIFE AND FAMILY KEEP GIVING HIM DIRTY LOOKS

‘CAUSE HE AIN’T GOT RHYTHM, WHEN THEY CALL HIM UP IT’S TO CALL HIM DOWN,

WITH THE DARING AVIATOR, HE ENCIRCLED THE EQUATOR
BUT HE AIN’T GOT RHYTHM, AND NO ONE’S WITH HIM, THE DUFFEST MAN IN TOWN.

Two of the many tracks with one of the most illustrious among Benny’s many sensational sidemen – besides Teddy Wilson, Gene Krupa, Harry James or Lionel Hampton – follow now.

Charlie Christian was the man who revolutionized the guitar sound in jazz, and the tunes are Seven Come Eleven and A Smo-o-o-th One, where he had only an 8-bar fill towards the end. — But what a sound! 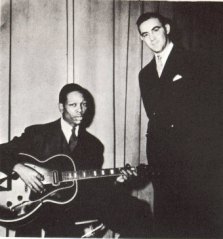 “He (Charlie Christian) wrote many of the group’s head arrangements (some of which Goodman took credit for) and was an inspiration to all.”

As “Il Dottore” has pointed out already, Artie came indeed more from the saxophone whereas Benny was a “pure” clarinetist. I would like to add something else from my trumpeter’s point of view:

Artie was, as has been stated here on the blog some time ago, the intellectual who always searched for new ways of improvising. Benny stuck more or less to the things he had learned in the beginning, and so his way of playing was “set” and didn’t change a lot during his life.

But, Benny was certainly the “dirtier” player who had plenty more different sounds on the clarinet “available” than Artie. I have uploaded a nice song, never recorded in a studio. It’s one of the rare pieces where Benny achieved a Shaw-like sound:

Blog owner’s note: It can be found on one of those mostly terribly sounding Fanfare-LP’s (LP 19-119).

This was the last orchestra led by Benny Goodman where his own musical ideas were a match to the sounds and the musicians of his band. All his later bands – especially the bop-attempts – lacked a certain congruence between Benny, who stuck more or less to his 1930’s and 1940’s style he knew best, and the arrangers and sidemen who of course came up with some new ideas, but had to cut ’em down as soon as the leader took a solo.

It’s very funny to hear a Phil Woods or a Zoot Sims in their boppish manners, and then their boss, swinging like in the old days. Two musical worlds, a “clash of styles” so to speak. Benny always sounded best when he played the material he knew well.

Here we have the Benny Goodman we all love: The victorious ‘king of swing’, never defeated in a jam session when challenged. I only wished there would be more recorded jam sessions where he took chances.

Now, click on Sunrise, and you will have the chance to see & hear Benny play one of the tunes he seemed to *own*.

Quote from my old blog, re: the above track:

Since this blog is called “Old & New Swingin’ Dreams” you all seem to miss “The King Of Swing”. — Your collective request is an order to me!

Here we go with Benny Goodman and one of his best solos – some even call it “his best” – “The World Is Waiting For The Sunrise”.

How true since it was recorded in the middle of World War II !

Here more text to the track:

No pictures this time, just music; swingin’ music; one of the best recorded solos of Benny Goodman; Mel Powell (p), Billy Butterfield (tp), Lou McGarity (tb) and others, recorded for Commodore on February 6, 1942. Benny Goodman has hidden himself behind the pseudonym “Shoeless John Jackson” …

If you click on the word you will find an article on the Commodore-Label and some re-issues of its recordings.

Did I say saxophone? Here we go with BG, playing lead-alto and no clarinet solo in 1936:

Riffin’ At The Ritz

This was the very first tune with Benny Goodman & His Orchestra I ever heard. Ziggy Elman on trumpet, and Vido Musso on tenor do the solos. The tune was dedicated to Boston’s Ritz-Carlton Hotel. A certain William Miller arranged it, which is a bit confusing because a Bob Miller is credited in brackets behind the title.

I really would like to know if they played Russian Lullabye when traveling through the USSR in 1962 … I personally doubt it. This is one of my favorite studio recordings with the famous 1930’s orchestra. — Also here: Tight ensemble work, fantastic solos by trumpeter Harry James, and Lionel Hampton on drums. All far too short for my taste.

Now to some small bands from the mid to late 1940’s, with a Benny Goodman at the peak of his powers. — I asked the following question on BBT, referring to the next title:

Does Benny’s boppin’ sextet number Bedlam from April 14, 1949 refer by any means to the Boris Karloff horror film with the same title, Bedlam (1946) ?

It probably refers to the famous English mental hospital that was known as “Bedlam” a synonym for confusion a chaos derived from the hospital’s real name Bethlem Royal Hospital.” Further with “Il Dottore”: “I think Mr. Scrooge says, ‘I’ll retire to Bedlam.’

No problem, when you retire to that great music:

Here’s another one of those Capitol small band recordings from the mid to late 1940’s I love so very much. When we’re talking about mental institutions: There’s A Small Hotel.

This is one of my favorites too, and I prefer it over the big band arrangement from the late 1930’s. It’s really cool, and it shows how Benny’s playing came close to perfection during that time. He had a very soft and warm clarinet sound here too, beside all virtuosity.

Apart from that, it clearly belongs to the bulk of BG-sides which prove Mr. Shaw being totally on the wrong track with his polemic statement, Benny would only play the clarinet, but no music. — Ouch!

In case Sabina would leave me, I would send her this one (she’s still here):

Lover Come Back To Me

Isn’t this absolutely beautiful? I hope you’ll agree with me. It’s from the only recording which features Benny Goodman with a bunch of lush strings.

The 10″-Columbia-LP album was entitled “Let’s Hear The Melody”, and so Benny plays the popular melodies straight and almost unaltered. The above is the only exception where he let ’em roll, which he did in 1938 already:

I know, I know! There are far more interesting live-recordings with Mary Lou Williams’ famous piece of early rock ‘n’ roll, and I’m willing to collect and post them in a row.

So, ask “Il Maestro” kindly and politely if you wanna hear more. Better do it with music, better ask for Music, Maestro, Please.

Although he sported that infamous “ray”, could BG be also a quite sensitive and charming fellow, couldn’t he?

“Il Dottore” and all, I will post some more of his sounds in the next few hours. (Which I did, as you can hear …)

Here’s another one I love very much, one of Benny’s warhorses he literally seemed to “own”, and where he always played grandiose solos.

Here we go again with The World Is Waiting For The Sunrise with Benny Goodman (cl), Red Norvo (vib), Mel Powell (p), Red Callendar (b), Lee Young (d), recorded in Hollywood on December 30, 1947.

Now, before we close this program, let’s listen how the “King of Swing” played in his later years. There’s not much to say but: He still had it!

This is from 1970, and it’s on a compilation. I don’t know anything about the personnel here. Please, could anyone of you fill the gaps?

In early 1970, Benny did a tour of eight European countries with an orchestra made of mostly English muscians. The only issued recordings were made at a concert in Stockholm on 20 Feb. Sweet Georgia Brown was played by a quintet consisting of Bucky Pizzarelli, acoustic guitar; Bill McGuffie, p; Lennie Bush, b; and Bobby Orr, d.

Okay, folks, no radio program without a closing theme. We started with Oh! Boom, and we’ll end the affair with Goodbye … With what else?

If there are any requests for some more of Benny’s sounds, I would be glad to fulfill them, in case I got them in my collection. But I can imagine that most of you have plenty, plenty of BG’s stuff anyway.

It was a pleasure for me to kick already open doors, as always.

Long live the KING OF SWING, or, as the ‘swing kids’ in Hamburg proclaimed: 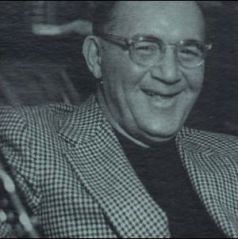 Thanks for sharing your memories. I saw Benny on German TV, in 1981, I think. He played one movement of the Mozart concerto and later on in a jam session with trumpeter Jimmy Maxwell, violin legend Svend Asmussen, and skin beater Charlie Antolini from Switzerland. I have only vague memories, but I remember that I didn’t dig the sound of Mr. Asmussen’s electric fiddle.

Here’s a video with the Benny Goodman Quintet, short before Gene Krupa left this world:

Another clip, endorsing a CD reissue. It’s from the “JazzVideoGuy” at Youtube:

Another “The World Is Waiting For The Sunrise”, but from 1944, and in motion pictures:

As I said above: The old warhorses worked very well up to the end: